SUCK IT 2010 IS OFFICIAL! ITS ON! CLICK HERE FOR ALL OF YOUR CAMPAIGN INFORMATION. DON’T FORGET TO COME OUT AND VISIT US AT CAMPAIGN STOP #3 TOMORROW at CreepyWorld in Fenton! THANKS TO TRACIE BIBB FOR JUMPING ON BOARD AND HELPING US WITH THE CAMPAIGN! TEXT “QUOTE” TO 48258 TO GET HER CONTACT INFO. IF YOU GET A QUOTE FROM HER BY CALLING HER UP – SHE’LL DONATE A BUCK.

Last night was a great time at the Hotshots in O’Fallon, MO.  Thanks to all the ladies, and all the fellas that came out to the W.A.R. Ladies Night.  Sex toys were won, beers were drank, food was eaten.  Good times had by all.  Today come join Patrico out @ Cricket Wireless in Fenton, MO from 4p-6p.  I’ll have a bunch of W.A.R stuff to give away.  Show is mega full today.  THANK GOD FOR THE MOTHER EFFIN’ WEEKEND!

If you want a NINJA sticker don’t forget to send a SELF ADDRESSED STAMPED envelope to the address listed below and I will send you out a sticker:
NINJA STICKER C/O WOODY AND RIZZUTO
401 S. 18th St
St. Louis, MO 63103

– Oakley – the sunglasses folks – donated 33 pairs of $180 designer sunglasses.  So – after each of the miners that rolled out of the mines – which was plastered ALL OVER the WORLD – got them about $41 million return!   Speaking of the whole miner rescue scenario – there is already a game for it.  Click HERE.

– Slow news day in Denver.  Check out this story about a “little one trapped in a truck engine.”  CLICK HERE.

– How crazy is this?  A vet put a dog to sleep after she had spinal problems.  So the vet gave her the shot and declared the dog dead.  The family took the pup home to bury her and when they woke up – she was alive!  They think she is resistant to the shot!  PET CEMETARY!

– A dude sexually assaulted and burnt a mother and her daughter alive and now the prosecuting attorney wants the jury to look towards a life sentence and NOT the death sentence.  They want to make the jury aware of the massive cost difference between the death penalty and keeping someone alive in prison. Really!?

– These idiot vampires stabbed their roomate because he wouldn’t let them suck his blood.  Odd thing is – he let them suck it before.  Hahaha..suck it. 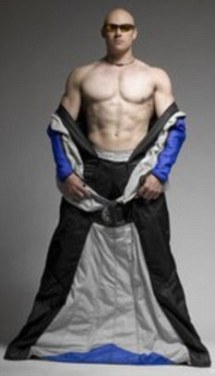 <—–A skydiver instructor – who claims he is gay – was accused of groping a gal and making inappropriate comments during the freefall….SOOOO FIRED.

– A preschool teacher JOKED about raping a student on his Twitter…umm…SOOOOO FIRED.

– A hotel worker went through a gals suitcase and put on her clothes…downside – she caught him….SOOOO FIRED.

– 2 cops robbed a drug dealer the other day and stole all the drugs and the money.  One problem – they robbed an undercovered cop.  SOOOOOO FIRED!

– South Park poked fun at Jersey Shore the other night.  Well – they portrayed Snooki as some fat looking gremlin thing.  But – however – she loved it.  She thought it was hilarious.  She even Tweeted, “Snookie wants smush smush..”
– Bill O’Reilly was on the View yesterday and Whoopie and Joy from the show rolled out. They just stood up and walked off the show. Barbara Walters got pissed. Woody thinks its staged.
– Michael Douglas is not planning on dying.  Just letting you know.
– Top Gun has officially been green lighted for a Part 2.  STUPID!

An Oklahoma dude chewed up his glass crack pipe and attempted to swallow it in an attempt to destroy evidence. He was only suspected of selling marijuana at a convenience store in Tulsa, Oklahoma, when police were first called Sunday. After he nabbed a beer without paying and refused to obey officers, however, he reached into his khaki shorts and pulled out the crack pipe. With police nearby, he tried to eat the evidence. The police report was unclear on whether the hooshe kept any of it down.

FRIDAY FAIL STORIES: ((CHECK OUT THE 8AM PODCAST FOR THE FRIDAY FAIL NEWS STORIES))
CHECK OUT THIS VIDEO OF A STUPID BITCH PROTESTING A RODEO.  HAHAHAHA!

LISTENER STORIES:
ASHLEY – She got all dolled up and went to a Guys Night Out and was turning a lot of heads.  However – it was because she had period blood on the back of her dress. GROSS FAIL!
MIKE – Mike had a chick on the back of his street bike.  She told him to pop a wheelie.  So he did.  And she went flying off.  It landed her 3 weeks stay in the ICU.  MEGA FAIL!

GUESS THE STATE:
Police are looking for a bald man who grabbed a chick by the ass, exposed himself and started to do the windmill and the dude fled.  What STATE?!
CALIFORNIA
Check the 7AM Podcast for the unfair advantage next time!
We’ll tell you all 4 states that these stories come from!