A man in Poland was pulled over for being mega crunked.  He was 3 times over the legal limit and had brought his pet goat with him in the back seat.  The reason?  He was escorting him to meet him up with a female goat…Needless to say he was arrested and charged with DUI.

CHECK OUT THIS CRAZY NUTTY BITCH…WTF?! 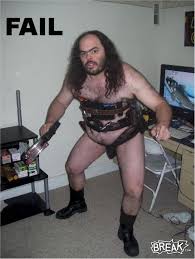 – A man tried to attack a hooker he just nailed with a hammer. Well – she grabbed the hammer and bashed his face in.
– Two dudes broke into a office building and went in to the elevator to get more “loot.”  When the elevator got stuck they had to call the cops on themselves
– A woman was floating down a river on an inflatable sex doll rafting trip.  She got stuck – and then had to call the cops to come save her
–
– A woman left her credit card at a bank she robbed.  Then she wrote the note on the back of her prescription.  Then when cops went to her house – she was outside because she locked her keys in the house.  Idiot.
– A dude was EXTREME….he decided to ride a trashcan down a hill..and failed…and hit his head on a tree and died! FAIL!

– A man saw a power line fall in his back yard and went to go check it out…he got electrocuted and died instantly.   Shocked by this his daughter yelled for her mom…the mom ran outside to check on the husband..and when she touched him..she was electrocuted and SHE died instantly.  But were not done yet.  When the 21 year old son saw both parents motionless in the backyard..he ran out to check on the two and HE was shocked and instantly killed as well.